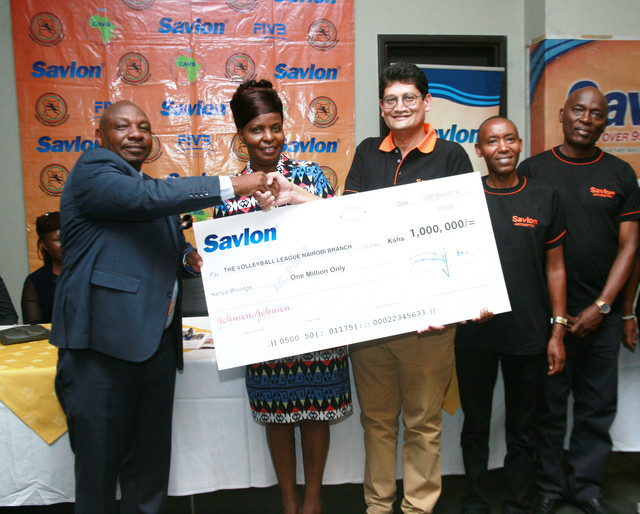 NAIROBI 10 MAY,2019, Kasarani Sub County will kick off their title defense against representatives of Embakasi East as the 10th edition of the annual Savlon Nairobi province volleyball league serves off next week.

According to the Kenya volleyball Federation Nairobi branch chairman Moses Mbuthia, the tournament has attracted over 20 teams in the self-supportive teams category as well as the schools and universities categories and matches will run from next week at the University of Nairobi grounds, State house girls secondary school and Eastleigh high school ahead of the grand finale that is slated for Kasarani indoor arena on 30th may.

Speaking today during the launch of the tournament, now a decade old, Mbuthia said, “We have come along way and we intend to keep rising the standards of the tournament. We are proud that the tournament has produced some of the best volleyball players who have turned up for Kenya as well as professional clubs and we aim even higher,”

Through their flagship brand, Savlon antiseptic, Johnson and Johnsons have injected one million shillings sponsorship into the league.  Radbone Clark, the official distributor of Johnson and Johnson products, managing director Rajan Patel noted that the tournament has kept growing and discovering talent and  for that reason the firm was committing to long term partnership with the regional federation. “We started off ten years ago as an experiment and the growth of the tournament has been tremendous. The organisers have been making it more interesting by adding more categories and this has become one of the most competitive leagues hence our commitment to sponsoring the league,” Patel said.

The Kasarani unit will be fighting to retain their title even as their opponents in last year’s final Embakasi come on the onslaught to claim revenge.

Embakasi Central has been drawn in pool ‘A’ together with Roysambu, Dagoretti North Kamukunji and visitors Embu County that has been entered courtesy of Embu Member of Parliament Jane Njiru who graced the launch at the EkaHotel.