NAIROBI 11 AUGUST, 2020: Football Kenya Federation (FKF) electoral board has today released the roadmap towards the federation’s elections that are set to be concluded on October 17, 2020

In a press conference, the Board's chairperson Kentice Tikolo stated that the board had received a go ahead from FIFA to conduct repeat elections from the branch to the national levels in accordance with the statutory framework of both the FKF and FIFA statutes.

County elections will be held of September 19, 2020 while the national polls will be held a month later allowing a window for appeals at the branches.

The electoral process will be held as provided for by the FKF constitution; FIFA Standard Electoral Code and the FKF Electoral Code with the contentious sub-county polls set to be held after the branch and national elections are settled.

Tikolo further announced changes to the eligibility criteria for candidates in a move that is aimed at giving fairness to all candidates.

Candidates for the position of President and Vice President must be Kenyan citizens and will now require to have at least five endorsements from any members of FKF and must have played an active role in football either as a player or an official in two of the last five years lowering this requirement from the previous three out of four years, a position that had been seen as punitive and aimed at locking out potential candidates.

As well, a candidate must meet the requirements of chapter six of the 2010 Kenyan constitution on integrity.

Candidates for the position of National Executive Committee (NEC) members also must have at least five endorsements from any FKF Members, two which must be from members domiciled in the region the candidate seeks to represent. The candidate as must also have played an active role in football either as a player or an official in two of the last five years.

Candidates seeking to be elected to branches at the county level also will require to have at least five endorsements from any FKF Members domiciled in the County that they seek to represent and must have played an active role in football either as a player or an official in two of the last five years. 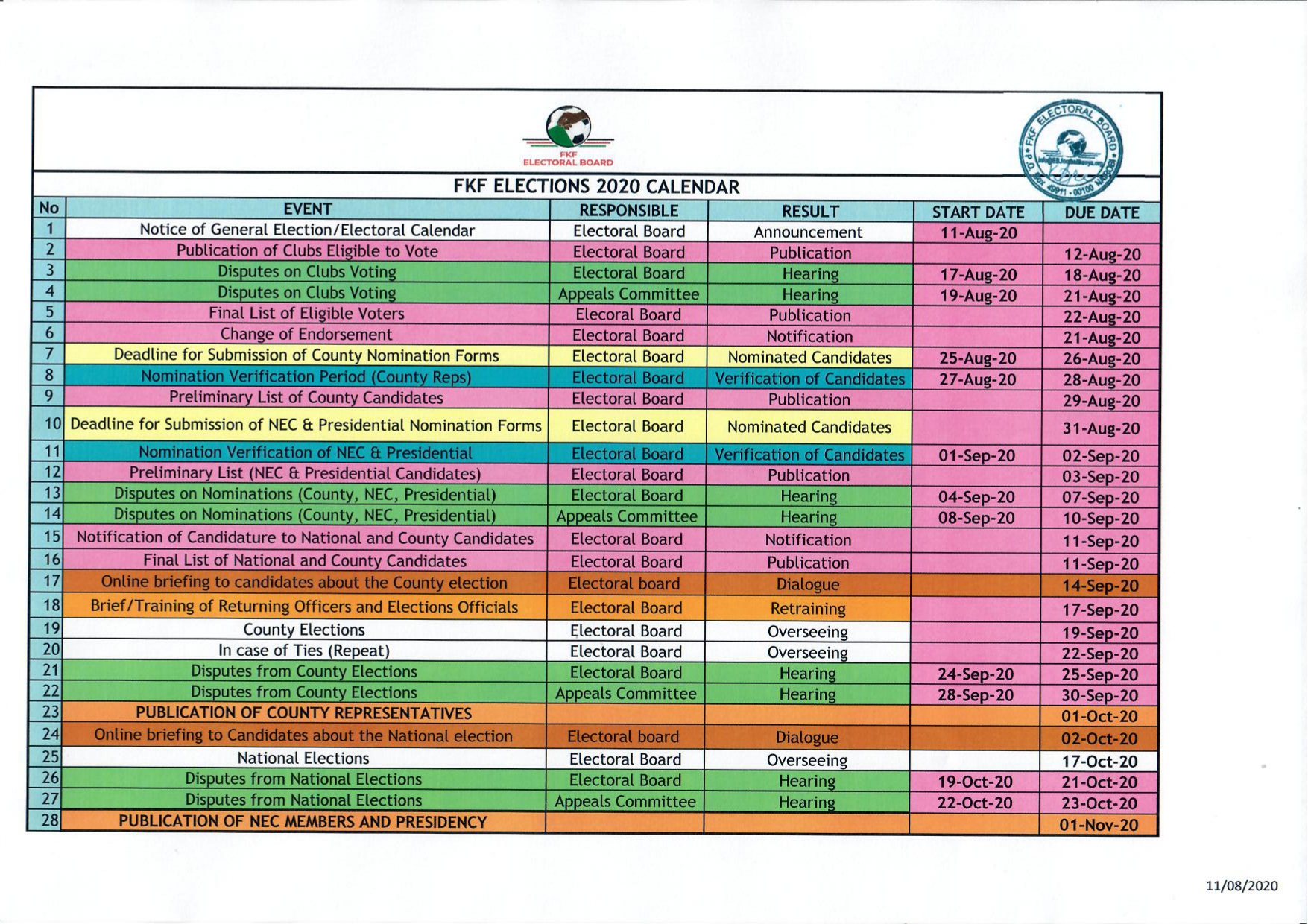 Tikolo announced that due to the economic impact that has been occasioned by the Covid-19 pandemic, candidates who had submitted their nomination papers in the last FKF elections both at national and branch level will not be required to resubmit their paper or pay the prerequisite nomination fees.

“Candidates who had submitted their nomination papers will not be forced to resubmit or pay the fees,” Tikolo said. “Any willing aspirant who felt left out in the last exercise will be accorded adequate time to submit their candidature and pay their nomination fees, as provided for under the existing FKF Electoral Code,” She added.

Further, clubs and FKF members who wish to withdraw their endorsements from a candidate or are looking at endorse a different candidate in accordance with the FKF electoral code  have also been granted the liberty to do so keeping in line with the window stipulated in the electoral calendar. However, Tikolo announced that since no much football activity has gone on since the last annulled elections, the FKF voter register shall remain the same.

The board in its electoral road map has allocated days for raising and resolving disputes regarding the register, including the eligibility of clubs tha will include scrutiny of a genuine league standing for all the number of years the club participated in the FKF leagues

Elections will be conducted in line with existing health regulations in the country for the safety and well-being of all concerned amid the Covid-19 crisis.

"The Electoral Board in consultation with FKF and FIFA will continue to explore the safest options for conducting the said elections, including the possibility of delegates voting virtually, should the COVID-19 situation in the country deteriorate in the coming weeks," Tikolo said.