South African bowler Vernon Philander has been fined 75% of his match fee by the International Cricket Council for ball tampering during the Test match in Sri Lanka.

The 29-year-old was deemed to have scratched the surface of the ball with his finger and thumb during Friday's third-day's play in Galle.

The punishment was accepted by the player without contest.

Philander is the second South African to be found guilty of ball tampering. 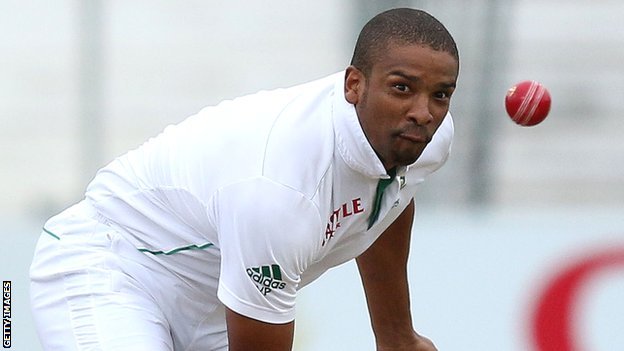 Last October, Faf du Plessis was fined 50% of his match fee after he was caught by television cameras rubbing the ball close to the zip on his trouser pocket during a Test match against Pakistan in the UAE.

Philander's offence was not captured live on air but was picked up after the day's play had finished when on-field umpires Billy Bowden and Richard Kettleborough, along with third umpire Nigel Llong, reviewed the day's footage.

Altering the condition of the ball is a level two offence under the ICC's Code of Conduct, which carries a penalty of 50-100% of the match fee and/or suspension from one Test or two one-day internationals for a first offence.

A five-wicket haul from Dale Steyn on Friday afternoon put South Africa in charge of the first Test in Galle, where they hold a 172-run lead after scoring 455 for nine declared and then reducing the home side to 283 for nine.